Statement on Inclusion and Diversity 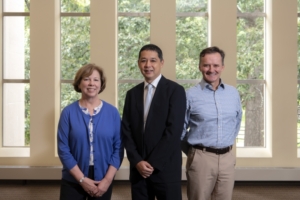 As stated in the Constitution, the Officers of SCOSTEP include the President, Vice-President and Scientific Secretary (ex-officio).

The current officers include:

The officers are part of the Bureau.
The President chairs the General Council.
The Scientific Secretary is a non-voting member of the Bureau.

Click here for a Message from Prof. Kazuo Shiokawa on his vision as President of SCOSTEP